skip to main | skip to sidebar

I've often wondered where the term Deadmonton comes from. While many folks seem to think our lovely city is lacking (in what I don't know - scenery? things to do?), a simple look at our summer lineup and you are bound to overcome any seasonal doldrums. This past weekends Heritage Festival is one of those fantastic events. 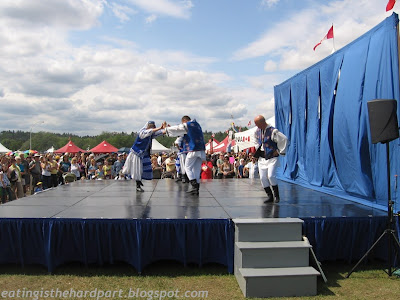 Starting as a two day August long weekend event in the mid 70's, Saturday was added in 1993 bringing it up to its current 3 day extravaganza. Hawrelak Park is jammed full of pavilions** (62 this year) representing cuisine and cultures from around the world. With over 300,000 people stopping by (2006 was our record year 350,000 people) it's a perfect place to sample and/or discover edible delights from Canada's diverse community. Besides being a great place to rub shoulders, the Heritage Festival is Edmonton Food Bank's single largest annual food drive with a goal of 50,000 kilograms of food! 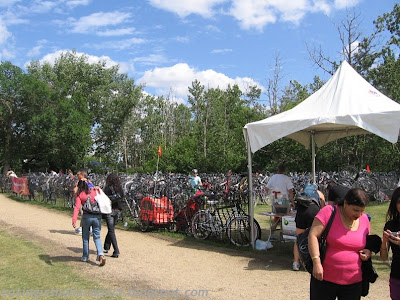 With no parking on site, imagine the mayhem that would cause, you can walk, bike or hop on a city bus. I biked on down and was pleasantly surprised to see a large, fenced bike storage area right at the entrance to the park. There was no cost to lock up your bike, or the festival for that matter, and I even received a sheet of reflectors for locking up my bike. 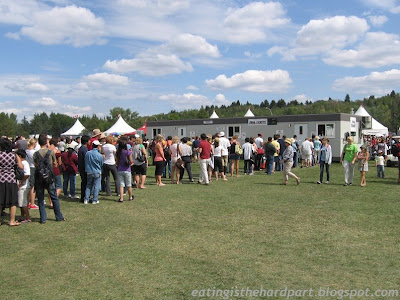 With the pavilions everywhere, I don't think there is a starting place that is any better than just any spot you stumble in at. Maps, including menu's, were available through out the park with food ticket kiosks in the center. The lineups to get tickets were quite long during my visit but moved along at a steady rate. I still heard quite a bit of unhappy grumbling from within the lineups, making me wonder if these people were somehow unaware of what to expect, or just so used to the instant gratification we live in. Tickets were priced reasonably I think, and I picked up 30 for $25. 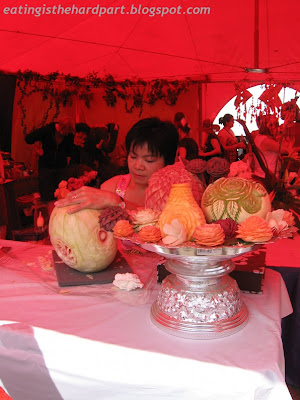 There was plenty to do or look at if you somehow didn't feel like eating. Shop, learn, play games..you name it, and there was probably something to keep you entertained while your companions indulged. If I had one complaint it would be this; *soap box* Quite a few, if not most of the extended lineups, were for a few select items - elephant ears were a prime example. I wonder if they could have a few booths/pavilions where they sell the top 3 or 4 items. I realize this is probably not practical, or even possible, but it would shorten the lines and allow people to try more culturally specific food . *steps off box* 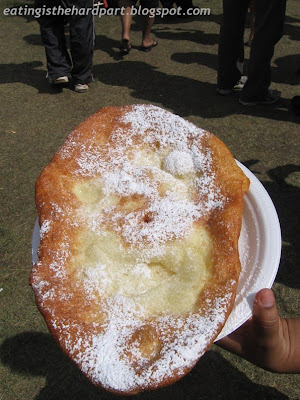 Speaking of elephant ears; they were the size of your head! Absolutely massive. I realize most cultures have deep fried dough, but I found it odd they were called elephant ears at every pavilion..maybe 'elephant ears' is the original Rosetta Stone. 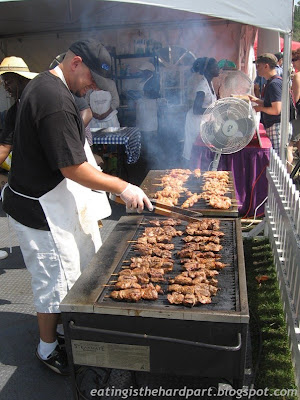 Speaking of food at every booth; meat on a stick. OK, maybe not every booth but I bet at least 30, if not more. What don't believe me.. 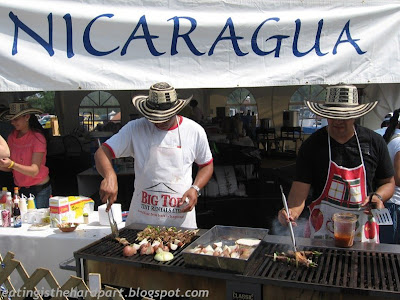 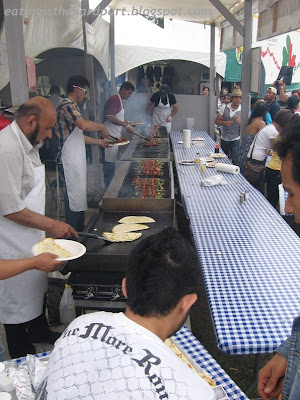 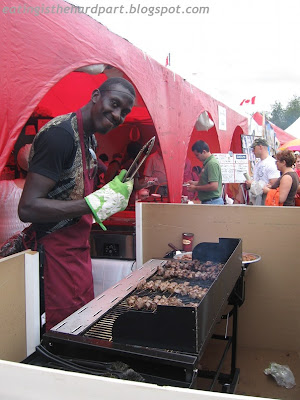 Believe me yet? I post even more..but I think you understand! 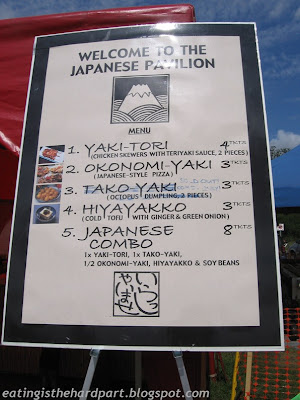 I was really exited to see Tako-Yaki at the Japanese booth, even more so after reading about Tenku Bakudanyaki in Richmond, but alas it was sold out. I guess I'll just have to hop on a plane and hit up Van City. 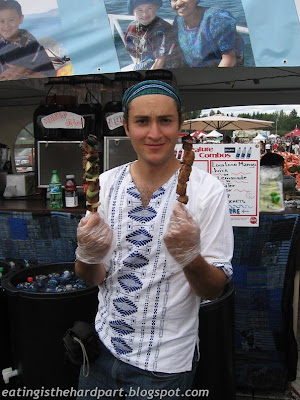 After wandering around the park, I stopped in at the Guatemala site in hopes of reminding me of my time there. Speaking of meat on a stick, after a brief bonding conversation about Guatemala with the above pavilion volunteer, he handed over his goods...for FREE! 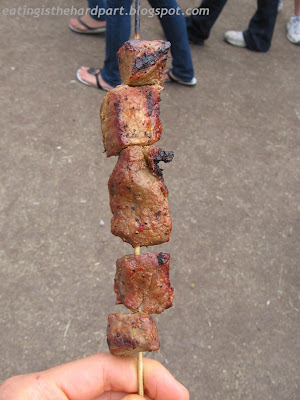 Labeled as Pincho's - grilled cubed meat on sticks with garlic, onion, cilantro, vinegar, and chili. They were good, a little bit plain but exactly what meat on a stick typically tastes like. 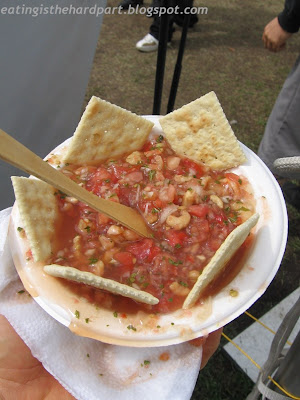 Also from the Guatemala site, Ceviche - shrimp, tomatoes, onions, garlic, cilantro, jalapeno's, lime. For festival food, I might have been pushing the limits here, but wasn't let down. Not the world's fanciest ceviche, this massive serving size hit the spot. 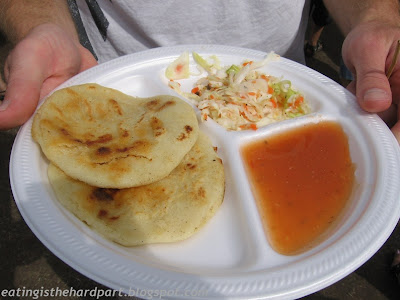 OK, and if your not tired of the Guatemala spot yet, Pupusa's - corn tortillas stuffed with meat, beans and/or cheese, served with spicy cabbage and salsa. I'd like to say that while you can find pupusa's in Guatemala, the smaller villages and towns I visited did not serve this treat. When I first arrived, I commented to a local about not seeing pupusa's anywhere in Guatemala, to which he responded - do we look Salvadorean? These were light and tasty, however, nothing compares to the memory of chicharrón versions available in Central America. The cabbage and salsa were wonderful. 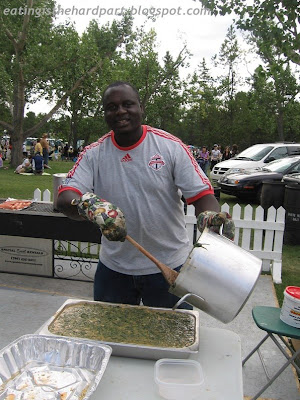 This wonderful gentleman, who requested to be in the picture, was plating a delicious smelling dish at the Zimbabwe site. What was it? 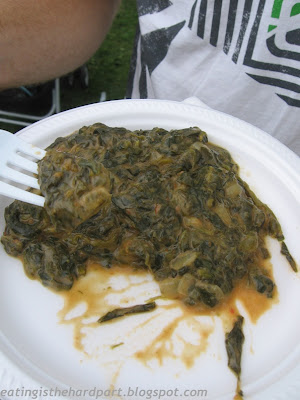 Murewa spinach - spinach in peanut butter sauce. Anyone who knows my family, knows we love PB, so believe me when I say this dish did not disappoint. I've never even contemplated spinach in PB, but it makes so much sense now. I think I'm going to attempt other vegetables in PB...maybe like an Iron Chef secret ingredient. 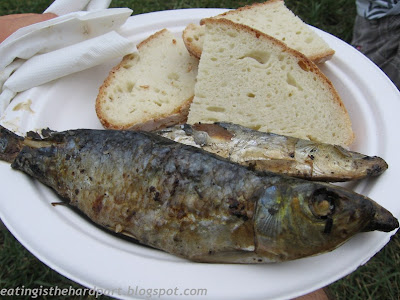 The Portuguese pavilion was anther exciting spot. Besides piles and piles of pastries (seriously, cream filled everything), it had Sardines BBQ - fish; I wonder if they could have sexy'd up the name a bit more. Three good sized sardines and slices of bread. The sardines were great although very oily and left my fingers smelling like fish for hours. The bread was nothing special, and I found it dry. 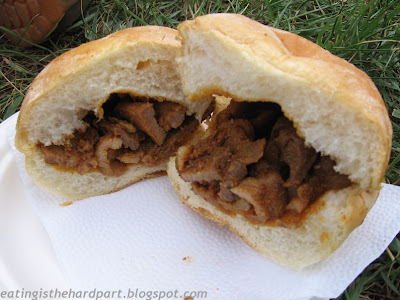 Finally, with some of the lines growing, it was a quick decision to use up the last food tickets at the same spot. Bifana - marinated pork loin on a bun. The bun was tastier than the bread hands down, and while the pork was good, the sauce really took it home. I almost wish it would have been a little sloppier with sauce (think pulled pork). 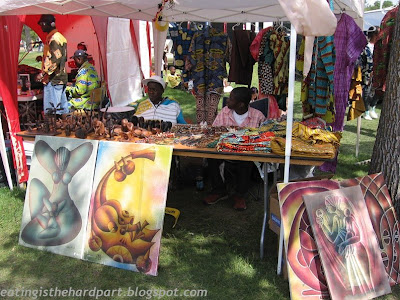 All in all it was great way to spend a day. Another wonderful example of what makes our city so great. With food being so universal, it's a perfect way to open doors and discover our neighbours. 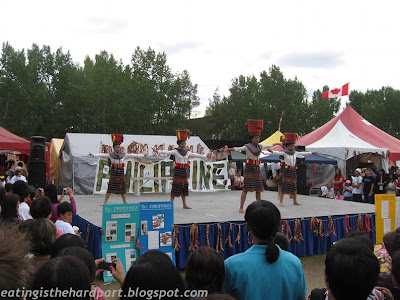 * The Canada pavilion was iffy (IMO) and offered; poutine, butter tarts, and nanaimo bars, but really I'll let you make your own assumptions.

**Kim - I looked for a Panama site, but alas they were not represented.

As I commented in another blog, it surprises me that in Vancouver we do not have a similar event. I mean, it is not that we lack festivals (as I have been blogging them in the last couple of weekends) or lack the cultural diversity - it is just that we do not have one that puts all of them under the same roof... Errrr.... Same area. *shakes fist*. But, to the food, it looks gooooood. And, given the cost of the tickets, the portions were quite generous!

Oh, thanks for checking if there was a Panamanian stand. Although there wasn't any, it does not take away my wish to be in the event... -_-

Loved the Guatemalan stand last year. Makes me sad I missed this year. :( By far one of my favourite festivals of the summer!

Your comment of the Canadian booth was exactly what the husband and I thought! Nanaimo Bars?? Poutine?? Surly there are better foods to represent Canada!

Personally, I love Heritage Days, moreso than Taste of Edmonton. I think you get a better bang for your buck AND a good workout trekking around the park.

I only wish the husband and I weren't caught up in that rainstorm on Saturday. Maybe we wouldn't have spent our last tickets so haphazardly!

My favourites were the spice cakes from the Russian booth and the ginger beef from Taiwan. My husband got the Japanese platter and the majority of it got thrown away. Ick.

I think if they called it 'Meat-on-a-stick-FEST', people would come from far and wide.

I was out of town for most of the weekend, so glad to see a report up! Agree with you on the suspect choices of food to represent Canada, but it's hard to argue that deep fried and sweet dishes usually go over well with the Heritage Days crowds.

I miss Heritage Days, among so much about Edmonton. One year considered stalking the Nigerian booth to get the spice mix for Suya.

My brother-in-law complains about Edmonton constantly, but can't actually say what bothers him. Hate that.

Maybe it should just be called - Meat on a deep fried dough stick - That would classify a huge portion of the festival! *sarcasm*

Sorry to hear about the rain Kristilyn, it can definitely cause you to make hurry up decisions. Those spice cakes looked enticing!

It's true Sharon..in fact I think any time you pop sweet and deep fried choices anywhere they are a success..heck even the folk fest had a green onion cake stand, and mini donuts.

Cheryl. Next year, I'll stalk the booth out for you and takes some photos. I know in my years away, it was one of my most missed items.

I also love Heritage Festival, but on Monday some of the food lines were a bit crazy. My friend and I made all our choices based on line size and ended up trying out some new stuff (to us) from Ethiopia, Sri Lanka and Somalia and none disappointed. I'll skip the elephant ears line any day for something a little different and save deep fried dough for the fair where there are millions of booths serving that (it is good though...).